In this essay, Mark McConaghy explains why British director Steve McQueen’s new film 12 Years as a Slave is such an important artistic work in our current visual and political culture.

We live in an age in which we are, by and large, desensitized to much of the imagery around us. It’s a simple product of the digital saturation through which we live our lives. From the constant flow of quicktime news clips on our desktops, to the vapid ease by which we binge watch television shows and bit-torrented films, images flow around us all the time.

And yet how many of those images do we really remember? How many of them stick with us for even a couple of hours after we’ve seen them, none the less a number of days or months?

What kind of an image would an artist need to produce that would linger within us, as a kind of haunting bruise, long after we had laid our eyes on it?

The naked human beauty, foreign architectural wonders, pornographic sex, action-violence, cartoon destruction, starving refugee bodies…all of these have become a routine part of our visual diet, elements that an hour or two on the internet or watching TV can easily provide us. In a world in which nothing is sacred, visually speaking, can any image truly move us anymore?

In 1980, the French literary theorist Roland Barthes tried to form a language by which he could talk about the small details within pictures that moved him. He described these visual elements with the word “punctum”:

It is this element which rises from the scene, shoots out of it like an arrow, and pierces me. A Latin word exists to designate this wound, this prick, this mark made by a pointed instrument: the word suits me all the better in that it also refers to the notion of punctuation, and because the photographs I am speaking of are in effected punctuated, sometimes even speckled with these sensitive points; precisely, these marks, these wounds are so many points. This second element…I shall therefore call punctum; for punctum is also: sting, speck, cut, little hole- and also a cast of the dice. A photograph’s punctum is that accident which pricks me (but also bruises me, is poignant to me). (Camera Lucida, 27)

And it is precisely this sense of bruising that the filmmaker Steve McQueen has achieved in his formidable work 12 Year as a Slave.

How many films have we seen that have depicted the experience of slavery in the American South? From the famed television mini-series Roots to Tarantino’s Django, there are no shortage of tales about the subject in contemporary film history. There is also no shortage of academic and popular books that have addressed the matter. This production of a cultural history has left all of us with an intellectual sense of what slavery was. We know, in a kind of abstract way, that slavery was a terrible dehumanization of an entire race of people, a sad, vile episode in American history whose shadows still stalk the American cultural unconscious.

And yet 12 Years as a Slave pushes us to an understanding of slavery that is not confined simply to the realm of intellectual abstraction. Its carefully constructed use of the camera crafts images that, like Barthes’ punctums, prick and bruise us. From the first shot of the film- a medium-wide frame of a group of slaves staring straight head, looking right at us- we are forced to watch these subjects. In as gut-wrenching a manner as possible, McQueen’s camera lingers on the forms of physical and psychological torture that rendered them into dehumanized servants for landowning whites. The camera is sometimes steady and unmoving, focused intently on their bruised and battered bodies. It is sometimes roving and circular, imbued with a kind of tortured momentum of its own, as the ferocious traumas of plantation punishment are enacted in front of us. 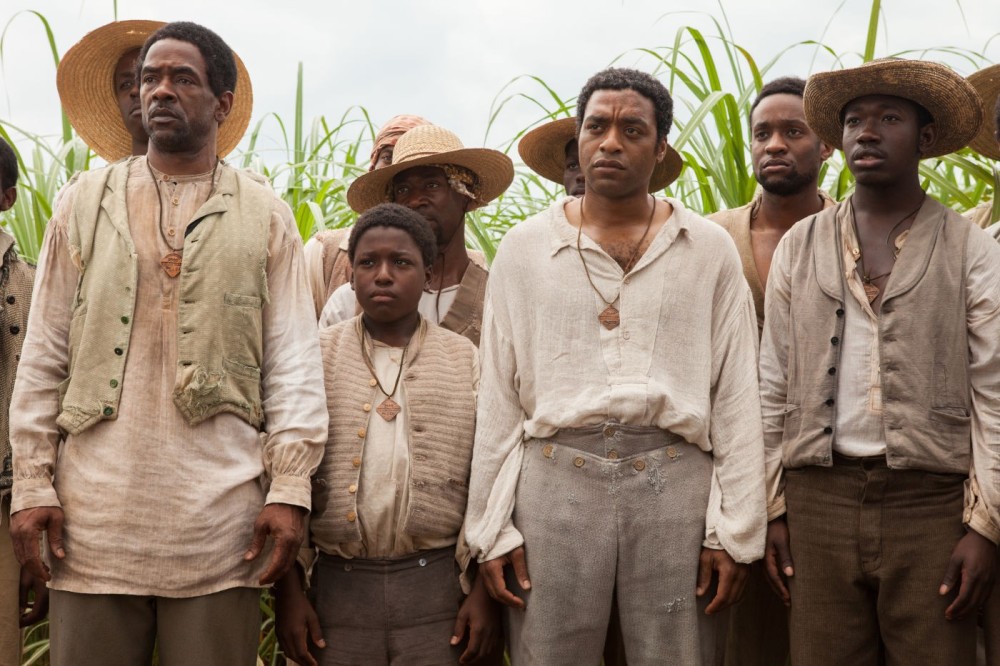 We want to flinch, we squirm and writhe in our seats…yet McQueen does not let us look away. He forces this record of human degradation to be placed squarely in front of our eyes, again and again and again. In such a way, McQueen’s film screams out to its audience in as forceful a tone as possible: look at what happened here. Look at the reality of this nightmare, at how bad it really was, look at this time when human beings could treat one another with such vile disregard for suffering.

And as the protagonist of the film, the kidnapped freeman Solomon Northup, fights to keep his own sense of humanity, we see the full depths of what white colonial violence did to black slaves. How, beside the constant burden of physical suffering, the sense of racial inferiority which the slave system was based upon was at risk of becoming ingrained in the self-perception of subaltern subjects themselves. Northup’s fight is not simply to endure the lashings and beatings of the cotton-lined prison that is the plantation. Rather, it is to keep his mind untouched from the ideological bile that his white slave owners spew, backed by delusions of Christian righteousness and racial superiority.

And yet for all its bruising power, the film does not indulge in liberal humanist cant about what American slavery was. It does not suggest that it was based on the fall of a group of Southern whites from normal humanist precepts of social relations. The film does not allow us to believe that slavery was something outrageous, exceptional, or heinous for the whites of the time. It does not indulge in the myth of a universal humanity that was shared by all people and from which slavery was but a kind of heinous deviation.

Instead, it forces us to understand that slavery was mundane; it was ingrained into the social system; it was a matter of property and economic profit, nothing more; it was not the humanist outrage it is today, but rather just a part of the way people did business. A common-sense fact of life. 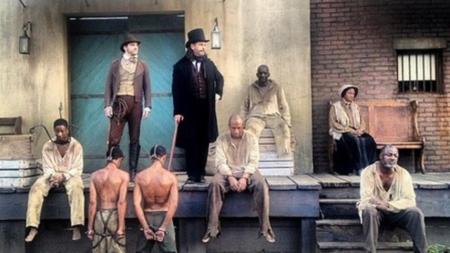 As evidenced by an incredible steady-cam shot of a slave market- in which a glowingly confident Paul Giamatti puts his human wears on display, one body after another parading in front of the camera- we come to understand the supremely rational economic logic that undergrid the torture of blacks in the American South during the mid 19th century. Giamatti talks about the slaves in his workshop the same way we today talk about long-term investments in digital products or land-based resources- as a question of the money we can make by the ownership, development, and barter of commodities in a market place.

As such, the film reminds us not only of the way the profit-motive powerfully shapes (and distorts) ethical imperatives, but of the powerfully historical nature of all ethical codes themselves. What seems so utterly incomprehensible to us today, so backward and feudal, was perfectly reasonable to a dominant and educated class of people in the 1840s.

The film thus accomplishes two artistic achievements of no small order. Its careful visual choices make images powerful once again. Like Barthes’ punctums, these are scenes which bruise us, which prick our delicate, post-colonial sensibilities. And it is through this force of trauma that slavery as an economic system is made un-shakably clear.

As such, McQueen’s film serves to not only remind us that images can still have power in this day and age; it also forces us to question the common sense truths of our own time. For we should never forget that what once seemed normal and natural one hundred years ago seems utterly, impossibly barbaric today.

One hundred years from now, what kind of barbarisms will people accuse us of having internalized and perpetuated? What are the forms of social violence that our modes of thought do not allow us to even see, none the less address?

Let us never embrace the illusion that we have achieved a society in which the full humanity of every person is nurtured and valued. We have come a long way since the racial violence of the 1840s; yet the standard of judgement should not be how bad the past truly was.

Rather, it should be how just the future could be, if we had an ethical will that matched the material largesse we have so unequally created across the world.

Mark McConaghy is a doctoral candidate in the East Asian Studies Department at the University of Toronto. He studies political economy, aesthetics, and the dynamics of historical change in the 20th century. An avid cinephile, he also reviews films for the Toronto Review of Books.